Another one bites the dust

The last few years have not been kind to those of us who care about conserving the heritage of our city. A long real-estate construction boom and the exponential growth of Bangalore have resulted in the loss of many lovely old buildings, replaced for the most parts by structures of abominable ugliness.

I don't know how many of you understand what we are loosing. Maybe an image can move you where words fail.

On the left is the photo I took sometime back of a house off Queens Road, close to the Indian Express circle. The structure is not in a great condition but you can still see the beauty in its form and the graceful ornamentation on the crenelations above the bay window.

I pass by this place often and last month my heart broke, once more, as I saw that this too had succumbed. On the right is what remains as the vandals who masquerade as builders hack away at the lovely building.

My first experience with seeing a graceful building go before my eyes was with the Kannan Building on MG Road, which housed GK Vale, Lawrence & Mayo, Lakeview among others.

Among the last few surviving heritage structures on MG Road, its demise was a long drawn out and much publicized affair as the tenants moved out one by one. I kept hoping somebody or something would intervene. A PIL in the High Court, administrative intervention, anything. But nobody much seemed to care and one day the demolition started.

I don't know if I will be able to harden my heart and look away as these beauties from the past bite the dust one by one, till we have nothing but a banal, characterless city, the only type of city we seem to deserve.

I hope there are some of you who want better. All is not is not lost. Yet.

There are still parts of Bangalore that have significant heritage buildings that survive. The lanes and bylanes near Shivaji Nagar/Indian Express still have a few lovely bungalows. KG Road and the region around Town Hall have some classical and art-deco commercial buildings from the early and mid parts of the last century. A few parts of south Bangalore still can remind us of what this city used to be.

But to preserve what is left, we need a law to preserve this built heritage, at the same time protecting the interests of the property owners. This is not something unique or unprecedented, even in India. Bombay and Delhi have already blazed the way. Many groups and commissions in Bangalore, the latest being ABIDE, have recommended such legislation for Bangalore, but alas nothing has come to fruition.

We now have a small window of opportunity. The economic slowdown in the US has impacted the IT sector and, temporarily, brought new construction activity to a halt. We have an upcoming election to the BBMP - the period when politicians are most receptive to public opinion. This is the time to press for the passage of such a law.

We need to mobilize and make our voices heard. Whether it is letters to newspapers, ministers and MLAs, questions asked to BBMP candidates, PILs etc. Anything that works. Unless we can bring sustained and significant pressure to bear, all we will bequeath to posterity will be a wasteland of glass boxes and ugly malls that could belong anywhere from Singapore to Detroit and everywhere in between. You won't want to live in such a city - I guarantee it.
Posted by Ashwin at 1:54 AM 4 comments:

What do you know, BMTC has gotten savvy enough to print brochures containing timetables for the Airport Volvo routes and hand it out to interested folks.

I picked one up on the BIAS 7A on my way to work today, and that because a fellow passenger was asking the conductor if there was a timetable. On my own it would never have occurred to me to imagine that fancy stuff existed. Here are the scanned images - click on them if you can't read it.

Missing is BIAS 1 which goes to Gottigere, down Bannerghatta Road. There doesn't seem to be any routes numbered 2 0r 3 - funny I never noticed this before. 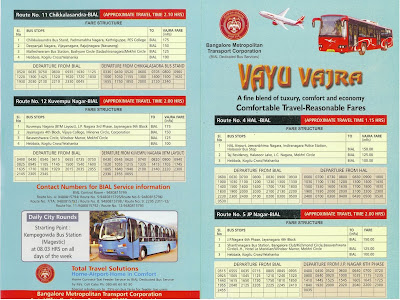 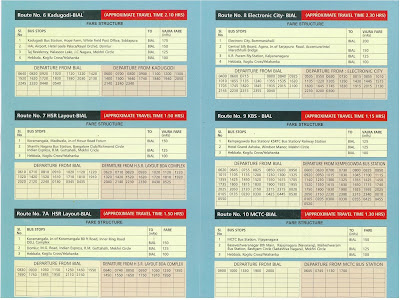